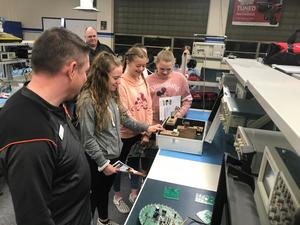 East Valley Robotics Team
On February 27, East Valley had a robotics team compete at ISU in Pocatello for the state championships.  Our team of all girls, took their robot named Baby Speedy and did very well.  There were 30 of the top schools in Idaho there with only one other being a middle school.  After 6 preliminary matches, they were 5-1 and ranked #4.  In the single elimination tournament, they dominated throughout and knocked out the #1 seed in the semi-finals.  They put up a good fight but lost in the finals, taking 2nd place in Idaho.  They received awards for tournament finalists and excellence award for middle schools in Idaho.  So Proud!  Go Bobcats!